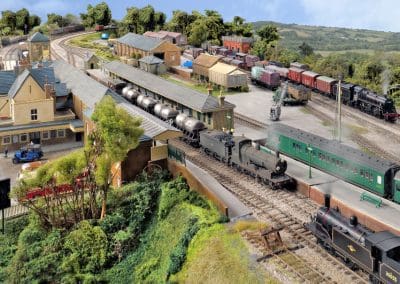 Back by popular demand!

The line through Wimborne finally closed in 1974 and now only a few traces of the line remain in the local area. Hopefully our model provides some tangible connection with the time when Wimborne was part the national rail network and an important part of Wimborne’s recent history.

The model represents Wimborne from just east of the low narrow bridge at Leigh Road to just west of the Stour viaduct, adjacent to Poole Road, and just short of Lady Wimborne’s Bridge. The station area is to scale but the curves at each end are considerably greater than they would have been in real life.

Inevitably there are gaps in our knowledge but all the major items on the model are built as accurately as possible, although some of the buildings are slightly out of position in relation to each other due to the constraints of the baseboards.

We run trains suitable for the line from mid 1950s to the end of passenger services in 1964 using two forms of running. One that uses all four operating positions so there is lots of movement. The other is a replication of the actual timetable from the late 1950s.

The Model has featured in the Railway Modeller, the Hornby Magazine and most recently in British Railway Modelling. In October 2021 it appeared at the Great Electric Train Show and in April 2022 attended the Shepton Mallet show alongside the largest model railway in the UK. Wimborne is due to attend a number of other Model Railway shows in venues across the UK.

Wimborne Railway Society meets every Tuesday and Thursday at the United Reform Church Hall, Chapel Lane, Wimborne. The Thursday meeting has a varied programme talks/activities interspersed with club nights where members can use the test track and talk ‘railways’. Tuesday is usually a work session on the layouts.