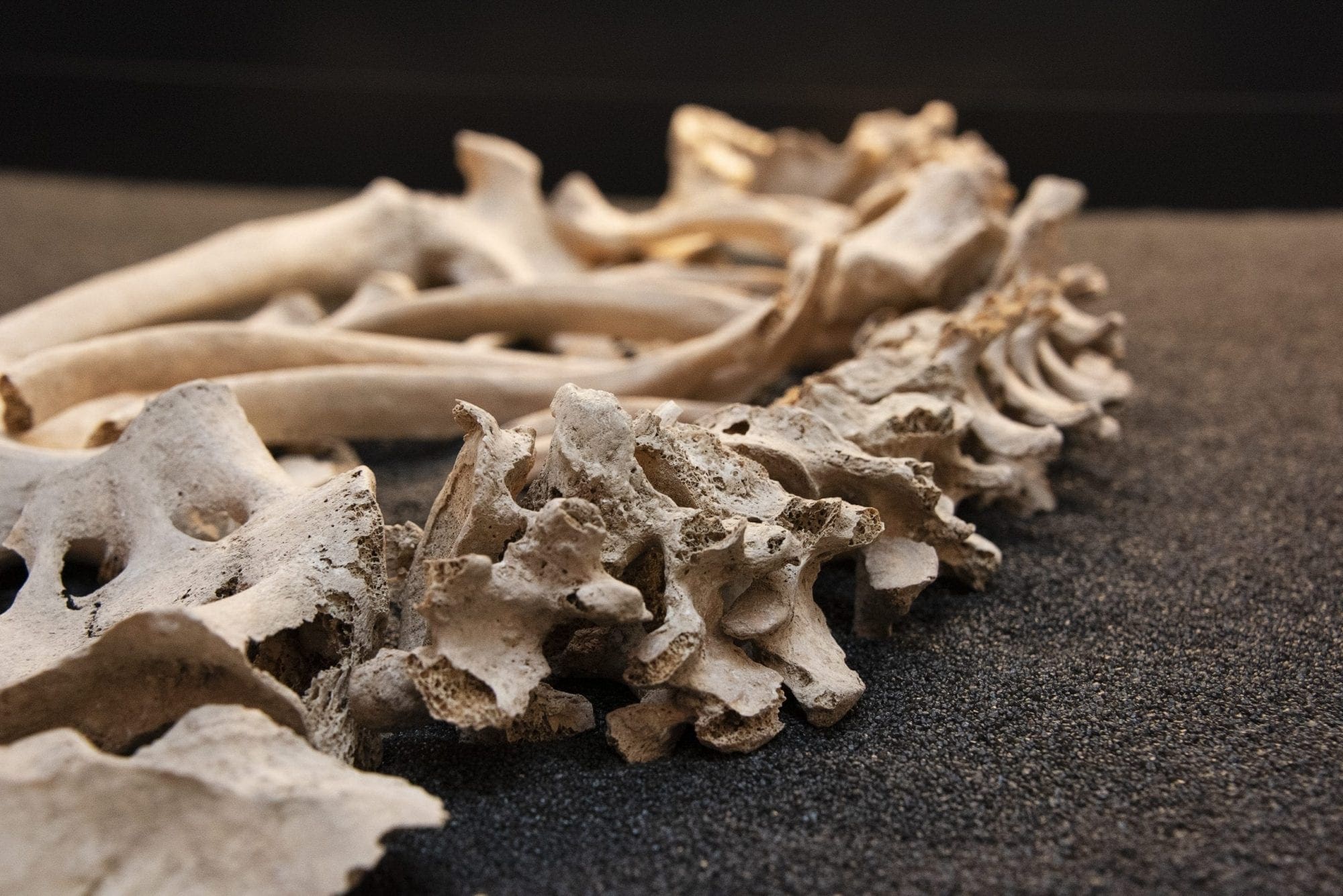 Archaeological excavations at Tarrant Hinton, Dorset, between 1967 and 1985 uncovered a variety of evidence for settlement between the Iron Age and the Roman period. Possibly the most significant discovery was the skeleton of an Iron Age man whose spine displayed signs of tuberculosis (TB). The man, who died between 400 and 230 BC, is in fact the earliest case of TB ever found in Britain. More recently, chemical analysis of the man’s bones and teeth, carried out on behalf of the Museum of East Dorset, has finally answered some key questions about his origins. The results show that the man arrived in Dorset as a child, around the age of eight. His family came from an area of Carboniferous Limestone outside Britain, somewhere to the south or west. The skeleton is now on permanent display at the newly-refurbished Museum of East Dorset in Wimborne.

Professor Alistair Pike, Professor of Archaeological Sciences at the University of Southampton, helped build a picture of the man using mass spectroscopy to investigate stable isotope ratios (carbon, nitrogen, strontium and oxygen). This type of analysis works on the principle that whilst everyone’s bones and teeth are made up of the same chemical elements, differences in the precise form of these chemicals can provide information about a person’s diet and also the source of their drinking water when their teeth were forming in childhood. Samples were taken from the tooth enamel of three molars whilst collagen was extracted from rib and long bone fragments.

Carbon and nitrogen isotopes indicated that the man ate a mixed diet consisting of plants (cereal crops and other vegetables) grown on chalkland, whilst the bulk of his protein came from cattle and sheep. His diet was less varied than that of other Iron Age people as there was no evidence of marine or freshwater fish or pig.

Strontium isotopes showed that the man was living on the southern British chalklands between the ages of eight to fourteen, when his third molar (wisdom tooth) was developing. However, the oxygen values for the two earlier molars, suggest a non-local origin before the child was weaned on to solid foods.

The combined strontium and oxygen isotope analyses suggest a high probability that the man spent his early childhood in an area of Carboniferous Limestone to the west of Britain. This type of geology is found in South or West Ireland, on the Atlantic coasts of South West France and in the Cantabrian Mountains of Northern Spain.

Dr Simon Mays, Human Skeletal Biologist for Historic England said: “We know from the DNA evidence that this person would have got his tb from another person rather than from infected meat or milk. Human-to-human transmission is favoured by crowded city living, but the fact that we find tb at this early date reminds us that the disease could still survive in the rather sparse human populations of the prehistoric past.

“Finds of diseased skeletons in Continental Europe tell us that tuberculosis was present there for thousands of years before our Tarrant Hinton man was born. The isotope evidence is tantalising. Perhaps he caught his disease in mainland Europe. But it could equally well be that tb was already well-established here by the Iron Age – it does not often show on the bones and we do not have very many skeletons from this period.”

Professor Alistair Pike commented: “The recent global Coronavirus pandemic has shown how the long-distance movement of people can rapidly spread disease and this will have been no different in the past. By using isotopes to trace prehistoric people’s origins we hope to determine when, where and how far the diseases of the time were spreading.”

James Webb, Acting Museum Director, said: “We know that the Iron Age man lived in a small farming settlement and was aged between 30 and 40 years old when he died. He had advanced tuberculosis in his spine (also known as Pott’s disease) so he must have been in considerable pain. The changes in his spine would have taken several years to develop. His mobility and daily functioning would have been impaired. The indication is that his community must have cared for him, despite his illness, for him to have survived so long.

“The results shed more light on Iron Age society. They also show that local people had access to the Atlantic sea routes which linked the coastal communities of Europe. The knowledge gained will help the Museum of East Dorset to develop new education sessions and resources around the Iron Age skeleton which will be on permanent display when the museum re-opens in October 2020.”

The research was made possible by a “Small Grant Big Improvement” grant of £1000 from South West Museum Development. The project entitled ‘The Iron Age TB skeleton – going beyond the glass case’ has enabled the Museum of East Dorset  to draw new conclusions and improve the interpretation of this significant and nationally-important artefact for a range of audiences.

About Museum of East Dorset

The Museum of East Dorset, previously known as the Priest’s House Museum, is Arts Council England Accredited and has won the coveted Sandford Award for Heritage Education six times. The museum manages an Information Centre and is a key player in the cultural life of Wimborne and East Dorset. It is housed in a Grade II* listed building dating from late Elizabethan times. The Museum reopens in October 2020 after a major refurbishment supported by the National Lottery Heritage Fund. Its collections cover the towns and rural villages of East Dorset and include significant artefacts, some of national importance.

South West Museum Development is an Arts Council England Sector Support Organisation. The programme has been funded since 1 August 2012 and provides support to Accredited museums across the South West region.  South West Museum Development works with museums to meet and exceed national standards, raise ambition, drive excellence and strengthen resilience. Their aim is for museums to provide engaging, valued and inspirational services to their audiences and communities using the Arts Council England’s five strategic goals set out in Great Art and Culture for Everyone as a framework. Find out more about the programme here: www.southwestmuseums.org.uk.

We are Historic England the public body that helps people care for, enjoy and celebrate England’s spectacular historic environment, from beaches and battlefields to parks and pie shops. We protect, champion and save the places that define who we are and where we’ve come from as a nation. We care passionately about the stories they tell, the ideas they represent and the people who live, work and play among them. Working with communities and specialists we share our passion, knowledge and skills to inspire interest, care and conservation, so everyone can keep enjoying and looking after the history that surrounds us all. Follow us on social media @HistoricEngland

The skeleton of an Iron Age man with signs of tuberculosis in his lower spine at the Museum of East Dorset. To the right of the skeleton is a replica of the same part of the spine of a healthy person. The man would have needed to use a stick or crutch. His Iron Age community must have cared for him, despite his illness, or he would not have survived for so long.

TB is a destructive disease which can eventually cause the bones of the spine to collapse. The changes caused by tb in the vertebrae would have resulted in approximately 60˚ kyphosis (curvature of the spine).

The Iron Age TB skeleton displayed in the new Life and Death Gallery at the Museum of East Dorset in Wimborne, Dorset.

The results of the isotope analysis confirm that the Iron Age man came from outside Britain, from an area of Carboniferous Limestone. This type of rock is found in south or west Ireland, on the Atlantic coasts of southwest France and in the Cantabrian Mountains of Northern Spain.