A feast of Christmas cards from the past 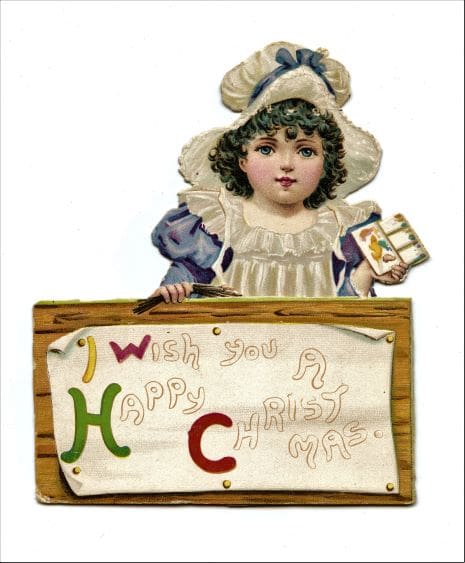 During December, the Museum of East Dorset will display a selection of Christmas and New Year cards from the late Victorian and Edwardian eras. The cards date from around 1880 to 1914. They can be found in the Stationer’s Shop, a room in the museum which was actually a stationer’s and tobacconist’s shop until 1872.

The first ‘commercial’ Christmas card was invented in 1843, when Sir Henry Cole had 1000 greetings cards printed for sale in London. When colour printing became cheaper and postage rates were cut, everyone could afford to buy and send cards to family and friends over the festive season. The Christmas card brought the first high quality, ‘fine art’ images into the homes of the ordinary people. By 1880, over 11 million cards were produced in Britain.

Chezzie Hollow, Director of the Museum of East Dorset, said:

“Some Victorian and Edwardian Christmas cards depicted ‘traditional’ winter or religious scenes but other designs were based on flowers, birds and picturesque landscapes. This may be because they celebrated the anticipated return of spring. However, humorous and sentimental images of children and animals were also very popular.

“Many people collected and cherished the cards they received. Thanks to these collectors, we still have the cards today. Some of the Christmas motifs will be very familiar but you might be surprised by some of the ‘novelty’ cards.”